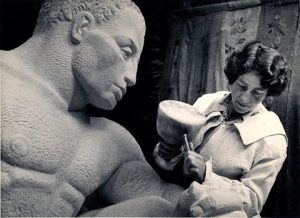 A major exhibition highlighting the work of an accomplished sculptor of the 20th century opens in Grasmere  later this month.

Ophelia Gordon Bell  (1915 – 1975) is known as the wife of landscape painter William Heaton Cooper. But the new show, A Vital Spirit, aims to bring attention to her own life and extraordinary talent.

Born in London and brought up among the artists of St John’s Wood in London, Gordon Bell was equally at home in the Lake District where her maternal grandfather was vicar of Urswick near Ulverston.

Trained in London, she exhibited at the Royal Academy, the Royal Glasgow Institute of Fine Arts, and the Royal Scottish Academy.

Her work can be found throughout Britain, from a carving of St Bede at a Carlisle church to the giant stone figures, Thought and Action, outside the Risley HQ of the former Atomic Energy Authority in Lancashire.

Perhaps her most celebrated work is the bronze head of mountaineer Sir Edmund Hillary. She also created many pieces portraying the characters of the Lakeland fells – shepherds and farmers and houndtrailers.

It was during a visit to the Lakes that met William Heaton Cooper.  They married and made their home in Grasmere and had four children. One of her sons, the painter Julian Cooper, is curating the new exhibition. He says: “She was truly a vital spirit. Everyone who met Ophelia was struck by her. Even if they did not know of her artistic skill, they were witnesses to her great vitality and kindness.

“She was a most remarkable woman, bringing together the two enormously contrasting worlds of London and the Lakes, and bringing immense vitality to everything she created.”

The exhibition will feature examples of her work as a student, as well as her industrial and religious commissions, and portrait heads.

A Vital Spirit: the work of Ophelia Gordon Bell opens at Grasmere’s Heaton Cooper Studio on May 18