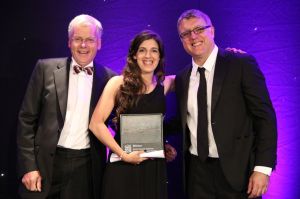 Now Patricia has been recognised with the region’s highest honour at the Cumbria Tourism Awards. She has won the Sheila Hensman Award for Outstanding Customer Service, only three years after arriving from Santander in Spain knowing only a few words of English.

Patricia, 22, who comes from Santander, has worked at the Cedar Manor for two years where she is regarded as a treasured member of staff, general assistant and waitress.

“Patricia is a real treasure,” said hotel owner Caroline Kaye. “She is singled out by so many of our guests for her kindness, thoughtfulness and her cheerful smile day and night. We are absolutely thrilled for her that she has won this award and that her efforts have been officially recognised.”

The award ceremony at Kendal’s Castle Green Hotel learned that Patricia plays a pivotal role in maintaining the high standards of service at the Cedar Manor, going above and beyond the call of duty in her attentiveness to visitors, and also in helping her peers and the managers.

“Her professionalism is matched with a sense of humour, remarkable for someone who knew little English three years ago,” said Caroline Kaye.

Caroline and her husband Jonathan were at the ceremony to see Patricia pick up her prize, along with her sister Alejandra Torre who had flown in from Spain for the occasion.

Jonathan Kaye said that from a timid start, Patricia now had an excellent command of English, but is also delighted to talk to Spanish guests in their native language.

“She has grown in confidence. Initially she was anxious about dealing with telephone enquiries, but now she’s a great communicator, capable of attending to anything, including welcoming guests in reception. She anticipates customers’ needs, stepping in even before they ask, understanding what might be required.”

He said that Patricia was especially attentive with guests who are elderly or disabled, always patient and kind.

Patricia, who recently passed written exams in English and Maths with very high marks, 89% & 100% respectively, was assessed in the hotel restaurant by Kendal college teacher Dean Boydell as part of her Hospitality & Catering NVQ and apprentice qualification.

Mr Boydell said : “Patricia consistently delivers excellent customer service. Having observed her in action over the past 18 months she has grown in confidence and skill. Patricia adapts her customer service skills to each guest, has a natural balance of friendly professional service and anticipates her customers’ needs. She has excellent knowledge of her organisation, local area and products and is able to give advice and suggestions, which adds to her customers’ experience.”

The Outstanding Customer Service Award is made in memory of Sheila Hensman who was a former Chairman and President of Cumbria Tourism. She believed that the customer had to come first and always encouraged those she met to remember and act of this. The award is intended to encourage those in the industry to strive for the very best in customer service.

The Cedar Manor has the highest TripAdvisor ratings in the area, and Patricia has been highlighted in many reports. She was described by one guest as “the best hotel staff member we have ever come across”.