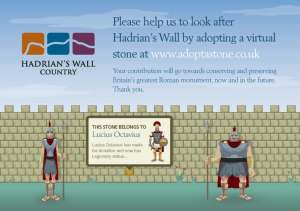 An initiative to help protect the archaeology and landscapes of Hadrian’s Wall is launched in the north this week.

Individuals and businesses are invited to adopt a stone on a virtual wall online and help pay for repairs and conservation along the 150- mile World Heritage Site.

Major funding cuts over recent years have led to fears about maintaining the quality of the Hadrian’s Wall World Heritage Site which stretches from Ravenglass in south west Cumbria to Arbeia in South Shields in the North East. It includes the iconic Wall itself which was built to protect the north west frontier of the Roman Empire between Bowness on Solway to Wallsend.

Nurture Hadrian’s Wall is administered by a team which has a successful track record of encouraging visitor giving for environmental projects. They will work with organisations involved with the World Heritage Site, and once sufficient funds have been raised will invite bids from groups who want a share of the cash raised to carry out projects along the entire length of the wall.

Projects could include work undertaken by community groups and volunteers to raise public awareness of the wall, improve access, and protect and improve the Wall and the surrounding landscapes and habitats.

The virtual stones on the website (www.adoptastone.co.uk) can be bought for a minimum donation of just £3 and supporters can choose their own location from the 1.8 million stones available. It will also be possible to buy a virtual mile-castle along the Wall. Donors will then be able to print off their own certificates of ownership.

“We are setting up a grants panel to assess bids that come in for the money raised,” said Karen Mitchell, director of Nurture Hadrian’s Wall.

“The Wall is such an iconic part of our history and we know that local people and visitors are fascinated by this period, and by this achievement. It appeals to so many different interests, with world class archaeology, spectacular landscapes, rare wildlife, and the chance to experience both complete solitude and vibrant towns and cities along the way.”

Keeping 150 miles of the Hadrian’s Wall World Heritage Site in good condition and accessible to all requires many actions to take place, Ms Mitchell said. There needs to be regular monitoring of the condition of the exposed archaeology of the site – the Wall itself and all the outlying remains. Not only that but all access across the World Heritage Site including gates, stiles, fencing, footpaths and interpretation signs and advisory communications with visitors need to be regularly maintained and kept in good condition.

“These activities aid visitors and help manage impact on this sensitive landscape,” she said. “This work needs the involvement of many volunteers, communities and experts to ensure a safe future for this important site. Other than the Hadrian’s Wall path national trail, whose works are funded by Natural England and the highways authorities, little of the broader work required on the whole site is publicly funded. These additional costs amount to over £200,000 per year and we need the public’s help.”

Hadrian’s Wall was a defensive fortification in Roman Britain, begun in AD 122 during the rule of Emperor Hadrian. In addition to its military role in keeping the edges of the Empire safe, gates through the wall served as customs and trading posts.

It is the most popular tourist attraction in Northern England and was made a UNESCO World Heritage Site in 1987, elevating the story of the Roman occupation of Britain to one of the most important chapters in world history.

Dr John-Henry Clay, a lecturer in the department of history at Durham University and a member of the Institute of Medieval and Early Modern Studies, is also a novelist whose book The Lion and the Lamb was set in Roman Britain. He is keen to support the fundraising initiative.

He said: “The Wall is not just a monument to me – for both my novels and my teaching it is a source of living inspiration that always reveals something new and unexpected, a place where past and present merge, and where the imagination comes into vivid communication with history.”

Dr Clay, who spent much of his childhood visiting historic sites and scrambling over ancient ruins, said that from an early age he was seized by the “twin passions of writing and the past, and so eventually decided to combine them in the realm of historical fiction”.

He is a keen hiker, having walked the length of both Hadrian’s Wall and Offa’s Dyke, and was a professional archaeologist before taking up a post teaching early medieval history at Durham University.

BBC radio presenter and DJ Mark Radcliffe has just presented a series of programmes about the Pennine Way which ended with his visit to the Wall, and to a number of sites including Vindolanda Roman fort and settlement.  He is backing the new initiative: “How amazing to think you have in some way got a tiny part of one of the nation’s great heritage sites. Come on people, what’s not to like?”

Nurture Hadrian’s Wall is part of Nurture Cumbria which is a registered charity, number 1130453