Christmas shoppers in Kendal are invited to an evening celebration  at the studio and gallery of artist Thuline De Cock.

Thuline, who comes originally from Belgium,  is combining two seasonal traditions by offering gluhwein and mince pies to all who come through the door at 139 Highgate on late night shopping night – Thursday December 8. 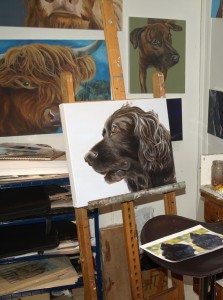 “We will have marked the feast of St Nicholas, or Sinterklaas as we know him, and we’re heading towards Christmas, so we wanted to offer something very European alongside something very English,” Thuline said.

She added: “At this time of the year in Belgium and Holland the mulled wine is known as Bisschopswijn, but we know that everyone can pronounce gluhwein!”

Her paintings of animals are being snapped up as Christmas presents, following a series of fairs across Cumbria, and several have been ordered to be shipped as gifts overseas. She also has a range of tea towels, mugs and aprons for sale.

Thuline opened the studio, opposite the Brewery Arts Centre, three years ago, but she’s been based in Kendal for more than 20 years. Originally from Bruges, she met her Cumbrian husband Dave Hill – also an artist – while on holiday in Spain. Her animal paintings are distinctive and unusual; regular visitors to the Lakes will have seen them at the Jumble Room in Grasmere, at the Sun Inn at Crook, and at Low Sizergh Barn. One of their cows was featured in a large painting Thuline sold recently.

Thuline exhibits in a number of galleries throughout the UK and Ireland, and she has work in private collections in Britain and overseas. She’s had solo exhibitions in the north, including Percyhouse at Cockermouth, Gallery15 in Penrith, Keswick’s Theatre by the Lake, the Brewery Arts Centre in Kendal, and  Liverpool’s Blue Coat Chambers.

She’s also had her work on show at other exhibition venues including the NEC in Birmingham, the Artist Fair in Chelsea, Stockbridge Gallery in Hampshire, and art fairs in London, Edinburgh, Bristol and Antwerp. 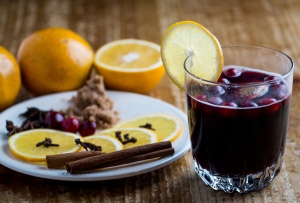