Building work has started on a new extension at an iconic Lake District tourist attraction.

A new gallery area and café are being developed at the Heaton Cooper Studio in Grasmere, an extension to the village-centre building which was opened by William Heaton Cooper in 1938. The project will create extra local jobs, and it should be open by Easter.

There will be new exhibition space, room for artists’ workshops, and a stylish café at the Studio, one of Cumbria’s most distinguished galleries and the pre-eminent centre for landscape art in the Lake District. A huge window will look out onto Stone Arthur and the fells above Grasmere.

The family art business was originally established by Alfred Heaton Cooper, in 1904. Now the current managing director, Becky Heaton Cooper, is supervising the expansion plans. “It’s very exciting to see work under way,” she said. “There will be more space to run workshops for artists and we want to create somewhere really inspiring for them to work.”

In recent years the scope and range of the studio has been extended considerably with the opening of the archive gallery, which has hosted a number of high-profile visiting exhibitions, showcasing the work of local, regional, national and international artists, and significant additions to the goods sold in the art and gift shop. The studio sells fine art prints – framed or mounted – and books about the Heaton Coopers and other Lakeland artists, as well as books about Cumbria and mountains generally. 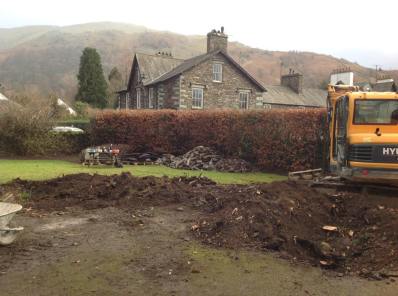 The studio also celebrates the work of other artists in the family, notably William’s wife Ophelia Gordon Bell, the sculptor famed for her head of Everest pioneer Sir Edmund Hillary, and their son Julian Cooper, the internationally renowned painter whose recent work has been concerned with finding a relevant contemporary language for painting mountains and rock.

“The studio is a lively centre of artistic excellence and activity, representing a tradition of artistic continuity in the village centre,” said Becky. “We hope that our new extension will make it an even more attractive place to visit.”