A dramatic new book showing the impact of climate change around the world has won the backing of Liberal Democrat leader Tim Farron.

Mr Farron, MP for Westmorland and Lonsdale, has endorsed the book, Images from a Warming Planet which was published recently by Lakes-based photographer Ashley Cooper. 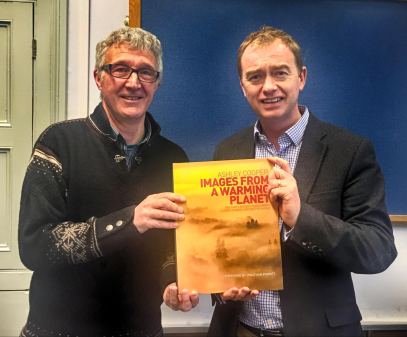 Mr Farron said: “This book is far more than just a collection of impressive photographs – it documents a massively important and concerning phenomenon that will affect us all. These images vividly show the effect which climate change is having on our planet, and serves as a wake-up call for us all to act before it is too late.”

He joins leading environmental campaigners who have  hailed the book, with its 500 photographs of global devastation, as a call to political action.

Ashley Cooper travelled the globe for 13 years taking photographs in key locations which illustrate the havoc which is being brought upon the natural world. He has amassed the world’s largest collection of pictures documenting climate change on every continent, from the Inuit communities of the Arctic to the coral atoll islands of the Pacific Ocean, showing the damage caused by dependence on fossil fuels:  flooding, glacial erosion, and deforestation.

Leading environmentalist Jonathan Porritt said: “This is a book about change. About the way the climate is already changing, and the way in which it will change even more dramatically in the future. About changes in peoples’ lives as they seek to make sense of weather systems that seem to have slipped those reassuring bounds of normality and predictability. About changes in our understanding of what’s going on around us, in our world views, in our orientation both to our current reality and to the future. And by and large, people really don’t like change.”

Ashley Cooper is one of the finalists in the Cumbria Culture awards for the photographer of the year title, which will be decided on Friday.