A young business which has led more than 400 newcomers to take up running is in line for a sports award.

Jogging Pals has been shortlisted in the finals of the Cumbria Sports Awards, which will be celebrated on Friday night.

Founded three years ago by Glyn Rose and Wayne Singleton, both England Athletics coaches, the Jogging Pals programme has taken former non-runners from couch to 5k throughout Cumbria and North Lancashire. 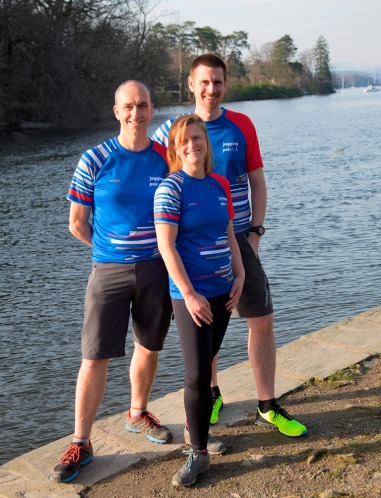 The scheme has  been so successful that the business now has six running leaders and is organising “improvers” programmes for runners who want to continue to 10k, 20k or even further. There are also guided runs in association with the National Trust and the Forestry Commission at Sizergh Castle and Grizedale Forest.

“It’s a great honour to be shortlisted for this award, and a tribute to our team,” said Wayne Singleton, a former smoker and drinker who now competes in triathlons, has run marathons, and is a keen open water swimmer. He works at the Alpkit store in Ambleside.

He started running again, after being a junior athlete, when he was breathless walking up the stairs. “It changed my life, and I wanted to do something to help others,” he said.

Those “others” include couch-potatoes who have lost weight, taken part in competitive races and even trained as coaches themselves. Some run for fun, or for the social side of running. “We wanted to prove that running is for anyone, even if they have never run before.”

He and Glyn Rose, another “convert”,  have since taken part in the Great Manchester 10k, Great North Run, London Marathon, New York Marathon, and Lakeland 50. Wayne has also competed in the Marathon des Sables in the Sahara desert.

Their aim was to encourage newcomers to achieve 5k with encouragement, with one training session a week and two other runs. “The plan was then to let them loose in the wild, as we put it, as there are so many running clubs in the region” said Glyn. “But we found that our members wanted motivation to do more, so that’s why we introduced programmes to extend their distances.”

Jogging Pals pay £45 for an eight-week programme, and members are encouraged to join up together to run at other times. “One of the keys to our success is enabling people to ‘pal up’ as the weeks go by, to train with other people who may live close by, and to make friends,” said Glyn. “The social aspect of jogging is massively important to us, and we make a lot of friends through this. But we also acknowledge that for some people, we are improving their health and fitness, and even saving their lives.”

Their website (https://www.joggingpals.co.uk/)  carries testimonials from newcomers, often seriously overweight, who have benefited from the programme, and have carried on running.

One wrote: “In the final night of the course I jogged without stopping once for the full 5k and I was elated. By the end I’d realised I’m a tortoise. I’m slow but steady and I get there in the end.” He now has an entry for the Great North Run.

The annual Cumbria Sports Awards will be held on Friday at The Low Wood Bay Hotel, Windermere. The event recognises the outstanding talents, commitment and successes of teams and individuals throughout Cumbria who are involved in sport. 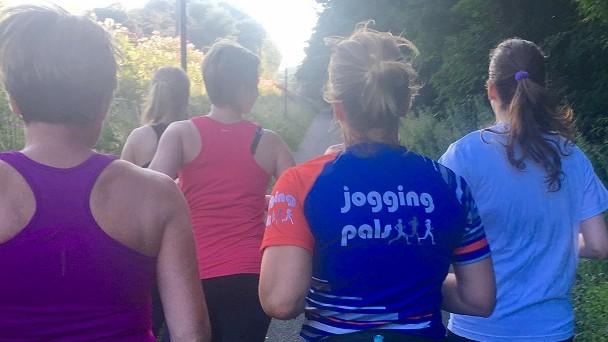 Where art lovers and fellwalkers and foodies come together now is an exercise in serenity and style. Mathilde’s, the café which opened this summer in Grasmere is quietly and elegantly proving to be the place to meet and linger. In summer on the long slate-paved terrace, or inside the light-flooded room with a window onto the fells – prominently Stone Arthur –where even the light shades are works of art and a glass door leads to exciting exhibition space. 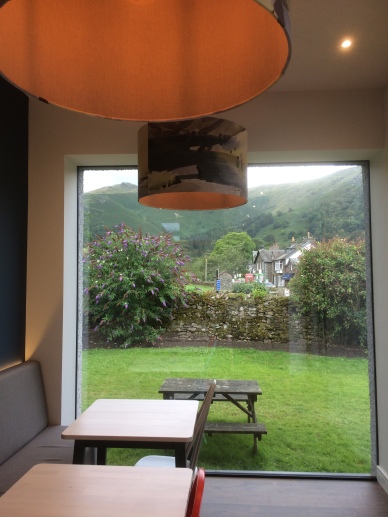 Now, in winter, the Nordic influence of this new addition to the Heaton Cooper Studio, is adding a cosy and subtly festive air. Cinnamon rolls are served, alongside Carvetii coffee, pumpkin spiced Nordic waffles, on Scandinavian artisan crockery. What you WON’T get at Mathilde’s is piped-music Jingle Bells.

The café is the vision of the Heaton Cooper Studio director Becky Heaton Cooper who is great granddaughter of Mathilde, and also an artist and designer as well as businesswoman. Becky brought in Head Chef Rob McGill and Manager Nicola Tickle who then recruited a team of fine bakers and baristas. Together they have developed an exciting, seasonal menu with a subtle Scandinavian influence. Salads of gravadlax or beetroot, lingonberries and dill; breakfasts of wild mushrooms on sourdough toast with poached eggs currently grace the plates of diners.

Mathilde was the young country girl from Norway who fell in love with an English painter and together they founded a dynasty of great landscape artists. Naming the café after her is a fitting tribute to the woman who played a quietly supportive role in the life of Alfred Heaton Cooper, and gave birth to their son, William. The father and son became known as the most famous of the English landscape artists of their respective generations. Her grandson, Julian Cooper, is now Britain’s foremost painter of mountain scenes and it’s his exhibition that was on show in the adjoining Archive Gallery all summer.

Mathilde’s was not an easy life. She arrived in the country with her young husband speaking no English. (They landed at Newcastle on November 5th, and hearing all the fireworks, and seeing light from bonfires, Mathilde asked Alfred if this was a special reception to welcome her.) Alfred was a struggling artist, and they moved around the Lakes from one home to another. They had four children, and Mathilde ran the home and devoted her life to their care. But they were a happy and loving family, occasionally returning to Norway for long holidays where Alfred loved to paint.

Now in the gallery founded by the Heaton Coopers, a new generation of artists is keeping alive their spirit. The latest is a young painter offering a new perspective on the landscape, Stefan Orlowski, whose current show opened as the now-traditional Grasmere curtain raiser for the Kendal Mountain Festival. It’s called Land Lives, and it is curated by Julian Cooper whose Full Circle exhibition has just ended.

Developing the gallery and opening the café has been a labour of love for Becky Heaton Cooper. “Mathilde was the love of Alfred’s life,” she says. “It really was a love match. Alfred was the centre of her world, and we think it’s wonderful to have her name here now at the centre of our new expansion.” 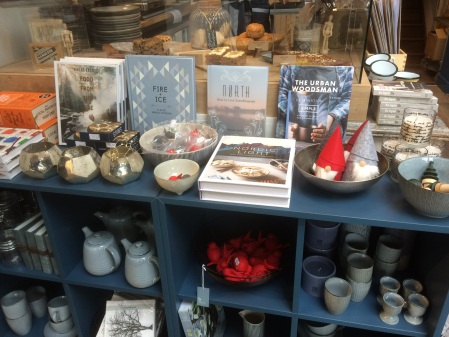 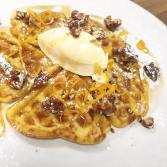 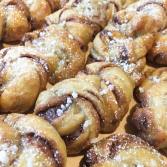 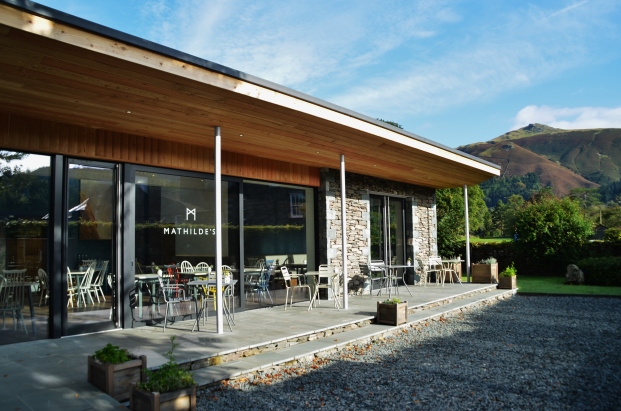 Campaigning photographer Ashley Cooper has won an international award for his work on the impact of climate change.

Ashley, from Ambleside, was presented with the Green Apple award for Environmental Best Practice at a ceremony at the House of Commons, in the media and marketing category.

His book, Images from a Warming Planet, is already shaking the political establishment and a plan is under way to send a copy to every world leader. The book documents his 13 year journey photographing the devastating impacts of climate change on every continent around the world.

Initially aimed only at local authorities, the organisers were soon asked to set up a similar scheme for commerce and industry.  Then there was growing interest from overseas, so all of these sectors are now a permanent fixture on the calendar with a presentation ceremony every November in the House of Commons.

The aims are to improve environmental performance, encourage the efficient use of resources, enhance the competitiveness of organisations, and support the wider goals of sustainable development. 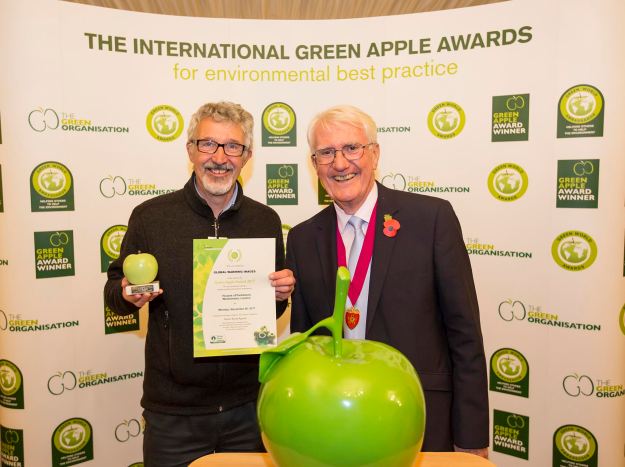