A business with a distinctive range of natural beauty products and treatments has won a key contract with the Lake District’s first world class resort hotel.

Jo Evans who runs Bespoke Aroma will provide a specially-created signature range of products for the re-developed Low Wood Bay on Windermere.

She and a colleague are also training staff to deliver a range of therapeutic and beauty treatments at the hotel’s new Spa which opens in September. Jo’s natural products are also being used at other leading hotels in the Lakes.

She has created an exclusive range of natural products for the Armathwaite Hall Hotel Spa at Bassenthwaite where therapists have been trained in the bespoke signature treatments; Jo is a trained massage therapist. And she’s creating a distinctive range for the new Spa at Ambleside’s Salutation Hotel.

Meanwhile Jo worked with Michelin-star award winning chef Kevin Tickle on recipes for a range of bespoke Bath Teas which are available in guest rooms at Grasmere’s Forest Side Hotel, and Windermere’s Ryebeck Hotel, both owned by Andrew Wildsmith.

Jo is also producing a Gingerbread pot pourri which is on sale at the Grasmere Gingerbread shop. And earlier this year she was chosen to handblend the tasting note salts for Martell Cognac’s launch of their new VS single distillery cognac: 1000 mini bottles of salts with plum, apricot and candied lemon blends.

She developed her range initially after listening to massage clients. “One had undergone treatment for breast cancer and her skin was very sensitive. Another was allergic to many products on the market. Others had dermatology problems, eczema and dry skin” says Jo.

“I decided to develop a natural range of skin care products because some brands still contain known skin irritants, ingredients we promise never to use.

“My range contains well researched ingredients that are skin nurturing, to help with different skin conditions and needs, as well as helping ease aching muscles and either promote relaxation or sharpen senses.”

She has been selling her own range – including hand creams, mists, bath teas and oils – at  top class hotels, and selected retail outlets in Cumbria and beyond.

The manager of the Low Wood Spa, Annabel Berry, said: “We chose to take on Bespoke Aroma on as our signature range simply because they are a naturally honest company who deliver the highest quality products. Working alongside Jo and her team to create a luxury bespoke range has been a fantastic venture and we are very excited to launch in September.”

It’s one of Britain’s most venerable and exciting of spectator sports. But are the thrills of grass track racing proving too daunting for cyclists today?

The tough guys and gals who are prepared to sit in the saddle for ultra-marathon distances like the Lake District’s Fred Whitton sportive may not have the sprinters’ muscles – or nerve – for a mad dash around 300 metres on “knobbly” tyres.

That’s the view of one of the elder statesman of the sport, Bob McLean, of Border City Wheelers, who says he’s struggling to get senior riders into some of the traditional cycling events.

A sprightly 75 who still rides his bike, Bob is the cycling manager for events such as Ambleside Sports. He first came to that event 60 years ago, cycling from Egremont in West Cumbria over the Hardknott and Wrynose passes.

“It’s grand to see youngsters coming into the under-12 and under-16 categories,” says Bob. “The crowds really appreciate that. They really warm to the young riders. But there’s not so many seniors taking part now.”

Grass track racing was once a very popular discipline in Britain and northern France, and in some areas, it still is. The format is simple. On a field such as a soccer field or cricket pitch, on a 300 or 400 metre grass oval that’s marked with chalk and wooden stakes, riders race each other on fixed wheel bikes that are fitted with knobbly cyclocross tyres to provide a bit of traction in the corners.

Races are short, so riders can have a go at a number of different races at any single event. There are sprint and endurance events, but arguably the most exciting is Devil Takes the Hindmost. This is a bunch race which sees the last rider to cross the finish line on each lap being eliminated from the race; when there are only three riders remaining, the race becomes a flat out sprint over the last lap to declare the winner.

“Many events with our type of location have switched to mountain cycling,” says Ambleside Sports chairman Jak Hirst. “However here at Ambleside we have retained track cycling around a 300m circuit which ensures that the sport remains exciting for the spectators. Both the Senior and Junior events are also handicapped which helps to ensure that every race is closely contested.”

There’s modest prize money, but lots of glory at stake. Cyclists who want to have a go should talk to Bob McLean on 016973 61392. Entries for Cycle Events close 12th July.

A new crime novel based in the Lake District will be set against the backdrop of the 2001 foot and mouth outbreak.

Burning Secret by Ruth Sutton is a vivid reminder of the tragedy of epic proportions that afflicted so many lives.

But first funding to publish the book has to be raised, with the author now represented by an unusual new publishing venture, Unbound.

The organisation was set up to help authors who would otherwise self-publish, and they help writers with crowdfunding schemes to get their books into print. 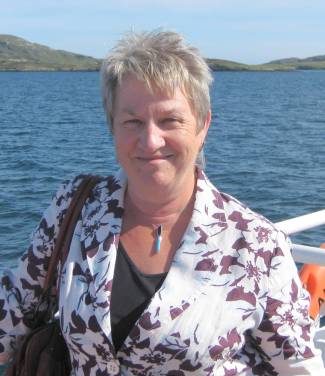 “Unbound are part of a new wave of publishers who work with authors on a 50:50 basis to get their books out. The first run is paid for by a kind of ‘crowd-funding’, hence the lower risk and ability to split profits with the author. It’s an exciting development.”

Her new novel looks behind the scenes in Cumbria in 2001 when millions of animals were slaughtered, families torn apart, farms barricaded, communities paralysed, and businesses lost.

“Many individual lives were changed forever, and Burning Secret is about some of those. At the heart of it are the innocents, threatened by events they could neither prevent nor control, and those who try to protect them.”

The book also introduces two female detectives who look set to get the pages turning, reflecting the prevailing ambivalence in policing as old methods and attitudes give way to new. DS Anna Penrose’s career has been unusual, with a degree and army service in Bosnia before she joined the force. Her promotion is rumoured to be about gender, not merit. She is hot on budgetary efficiency, performance targets and painstaking evidence gathering.

Her sidekick, DC Maureen Pritchard, by contrast, was a hairdresser before she joined the force. She has little patience with trendy ideas about gender, thinks of herself as ‘one of the lads’, and prefers intuition to fancy forensics. For Maureen, ‘targets’ are to be shot at.

Unbound publishers say: “We believe that everyone should be given the chance to seize their own success, and that great ideas shouldn’t fall between the cracks because they don’t fit the mould. And that’s what we’ve built – a better way of doing things. It’s a community, platform and a publishing model that shift the balance of power to you, people and communities that champion underserved ideas and voices.”

Anyone who wants to help get Burning Secret published can make a pledge at https://unbound.com/books/burning-secret.

Ruth Sutton’s earlier books can be found at  www.ruthsutton.co.uk

Runners of all abilities are being offered the chance of a training day with experts in the heart of the Lake District.

The “Run Well” workshop  is organised by Paul Tierney and Dr Sarah McCormack of Missing Link Coaching and will be held in Ambleside.

The workshop is designed for runners who want to make the most of their available training time.  It focuses on improving running performance through smarter strength training, running efficiency and injury avoidance.  There will be some indoor theory and then outdoor practical training on local trails and hills.

Paul and Sarah are both accomplished and race-winning athletes. A certified biomechanics coach and ITEC Level-3 certified Sports Massage Therapist, Paul has represented Ireland twice at the World Ultra Trail Championships and was the 2015 Lakeland 100 Mile Race Winner.

The workshop is on Saturday, 17 June 2017 in Ambleside, with an “early bird” rate of £60 if enrolled before May 17. Tickets are £70 thereafter.  Paul and Sarah also offer an optional one-to-one appointment for running technique analysis and coaching on Sunday, June 18. Spaces for these 60-minute sessions are limited on a first come, first served basis.

An exhibition by Britain’s foremost mountain artist, and the Lake District’s most eminent living painter, Julian Cooper, has opened in London.

Titled Upstream, the exhibition at Art Space Gallery shows Cooper’s new paintings of the high fells above Crummock Water and Buttermere, close to his home in Cockermouth.

It’s one of a trio of exhibitions this year to mark Cooper’s 70th birthday. A major retrospective opened earlier this month at Abbot Hall gallery in Kendal, and this will be followed by the final exhibition, Full Circle, on home territory at the Heaton Cooper Studio in Grasmere.

It was in the new studio there in 1969 that his father, the painter William Heaton Cooper, had just built, that he put on the first exhibition of work by Julian who had just graduated from Goldsmiths Art College.  Almost 50 years later, his work will be the first to be shown at the re-opening of the Archive Gallery at the Grasmere studio.

In London, with Upstream, Cooper explores the surface of a land shaped by the mountain streams that feed the region’s lakes. In painting after painting he traces the tributaries upwards beyond the last stone walls into the wild country where the becks and the streams originate.

He also sees a once familiar landscape ever more threatened and inadequately served by those who use it; a landscape now made political by contentious claims that the widespread flooding that has twice devastated Cockermouth is a direct result of poor water management and the traditional hillfarming practices.

Cooper’s paintings almost always involve close encounters with barren and inhospitable places and for more than four decades he has visited some of the most hostile and awe-inspiring terrain on the planet: the Andes, Himalayas, Alps, Tibet, Carrara and Tasmania and made paintings that do justice to nature at its wildest.

But his native Lake District is the bedrock of his practice; his true territory. He was born there, and has a strong desire to reach beyond mere appearance and uncover the underlying structure and the essence of the place: paintings that tell a particular story about the history of its appearance and the processes of change.

Art Space Gallery in St.Peter’s Street, London was founded in 1986 by Michael and Oya Richardson and is recognised as one of London’s foremost venues dedicated to showing and promoting serious painting.

He has work in public and private collections worldwide, has exhibited regularly in London since 1998, had a major retrospective at Museo Nazionale Della Montagna, Turin and was included in A Picture of Britain at the Tate.

Meanwhile, the Grasmere exhibition will open in June, marking Cooper’s birthday on June 10, and will run throughout the summer. This will include previously unseen work covering a range of time and subjects, including, people and urban scenes as well as mountains.

Upstream runs until May 26. http://www.artspacegallery.co.uk