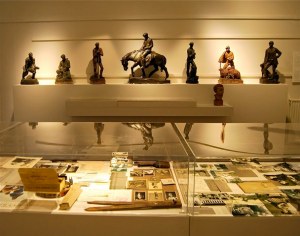 A leading Cumbrian chef is joining forces with a top art gallery for a special opening party in Grasmere.

Kevin Tickle, formerly of Simon Rogan’s L’Enclume, and Rogan and Company in Cartmel, is preparing the canapes for the opening of an exhibition at the Heaton Cooper Studio on July 1.

The exhibition, A Vital Spirit, celebrates the life and work of the sculptor Ophelia Gordon Bell, who was married to the landscape painter William Heaton Cooper.

Kevin is now working in Grasmere at the newly-restored Forest Side Hotel which is due to open later this summer.

He said: “It is great to be working alongside the Heaton Cooper gallery, it is important to build and maintain relationships within the local community and support each other.”

Ophelia Gordon Bell  (1915 – 1975) had a fascinating life and extraordinary talent, as the new exhibition highlights.

Born in London and brought up among the artists of St John’s Wood in London, Gordon Bell was equally at home in the Lake District where her maternal grandfather was vicar of Urswick near Ulverston.

Trained in London, she exhibited at the Royal Academy, the Royal Glasgow Institute of Fine Arts, and the Royal Scottish Academy.

Her work can be found throughout Britain, from a carving of St Bede at a Carlisle church to the giant stone figures, Thought and Action, outside the Risley HQ of the former Atomic Energy Authority in Cheshire.

Perhaps her most celebrated work is the bronze head of mountaineer Sir Edmund Hillary. She also created many pieces portraying the characters of the Lakeland fells – shepherds and farmers and houndtrailers.

It was during a visit to the Lakes that she met William Heaton Cooper. They married and made their home in Grasmere and had four children. One of her sons, the painter Julian Cooper, is curating the new exhibition. He says: “She was truly a vital spirit. Everyone who met Ophelia was struck by her. Even if they did not know of her artistic skill, they were witnesses to her great vitality and kindness.

“She was a most remarkable woman, bringing together the two enormously contrasting worlds of London and the Lakes, and bringing immense vitality to everything she created.”

The Forest Side Hotel is now owned by Andrew Wildsmith,  who also owns Hipping Hall near Kirkby Lonsdale, and The Ryebeck in Bowness. He plans to create a luxury romantic hotel on the Grasmere site. Food will be a major part of the offering at the Forest Side and Kevin aims to produce a 12 course tasting menu, with an emphasis on natural flavours.

Mallow flowers collected by Kevin for the canapes