Preston’s Bartle Hall hotel and restaurant has reached the finals of the prestigious Red Rose awards.

The country house hotel, near Woodplumpton,  is heading for the award ceremony in the Tourism and Leisure business award category. They are the only Preston representative in the final six.

Successful businesses were announced after a day of rigorous pre-scoring, whittling down from several hundred entries in each of the 25 categories. 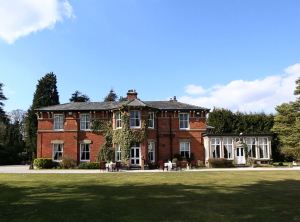 Bartle Hall’s owners Andrew and Nicola Haworth, will now face an interview and presentation at the Red Rose Suite at Blackburn Rovers.

Winners will be revealed at the glittering ceremony which takes place on March 10 at Blackpool’s Winter Gardens.

Bartle Hall, which recently reached the UK finals of The Wedding Venue Awards, is also a popular choice for short break holidays, conferences, business and networking meetings – and is famed for its afternoon teas. Set in 16 acres of gardens and woodland, the latest venture at Bartle Hall  was to transform – and rename – the hotel’s restaurant, Nest, which is in the command of a new award-winning chef, Craig Brown.

Nicola Haworth said: “We are delighted to reach the finals of this award. It is a fitting tribute to all the efforts of our team here to create something very special in the Lancashire tourism sector.”

Around seventy judges, made up of sponsors, business leaders and independent experts, assessed hundreds of written entries to name the finalists.

Judges said the decisions during the scoring of written entries were tougher, the stories bigger and the achievements greater than ever before.

They said: “The entries we received this year were stronger than ever, and many businesses across this great county are recording excellent performances.”